An adventure in comic creation where the actor discovers his or her own personal ‘Ridiculousness’ and learns how to apply it in both comic and dramatic art.

Workshop fees
Professional 410€
Concessions 310€
Concessions include: students, low income and those affected by these times of crisis… The Actors Space is a non profit organisation, please contact us to apply for concessions.
Accommodation fees: 60€ for the 8 nights (we own the place so you just need to pay expenses). See FAQ.

Meals: 120€ for all meals during the 6 days (breakfast lunch and dinner). No food provided on the day off.

Reserve your place with an 80€ deposit. Fill in the form to pre-book >>>

This workshop is for actors, drama students, drama teachers and writers/directors with a special interest in Comedy.

What makes us laugh? Some people seem to make us laugh by simply walking onto the stage but how? During this workshop we discover and explore each actor’s personal comic presence. We begin to understand and then develop the individual’s unique comic talents. Together we uncover the secrets of comedy.

Read what a participant has to say…

‘The Art of Comedy’ is led by Simon Edwards, a clown and director of comedy with more than 30 years of experience. This workshop has been developed since 1989 when Simon studied with Jacques Lecoq at his school in Paris. Simon has a natural talent for Comedy (he started working as a street Clown at 14 years old) and over the years has developed his particular approach to universal Clowning. He is teacher to some of today’s leading international comic actors. 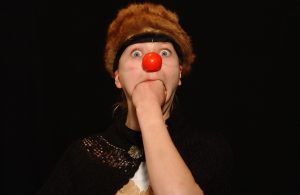 Who is this workshop for?
Professional actors will find this work intensive and refreshing. During The Art of Comedy workshop they will develop their comedic skills and will find the freedom to explore new areas of themselves and their art.
Students of performing arts that want to know how to get into comedy acting will find this very useful as they can attain the right habits early in their career.
Writers and directors will benefit by getting into their bodies and exploring their own unique comic potential. Through working with ‘comic situation’ and the driving forces in a scene, they will be able to identify why something is funny and fine tune their ability to develop it further. Creating comedy is a team ‘game’ that needs both comic material and sensitive direction to allow the best work to emerge.

The Clown makes us laugh but how?
Actors are often intimidated or scared of trying to make people laugh. Others over do it and seem to be having more fun than the audience. The balance is delicate. How do you move an audience to laugh? During this workshop we accompany actors step by step in a shared journey of discovery and a celebration of the ridiculous. Participants don’t have to worry about succeeding in making people laugh. This will come with practise and a process of ‘trial and correction’. Clown’ is a dynamic principle that is discovered through action and the interaction with the audience. Working in this way we have seen participants blossom time and time again.

The world of Half Masks
Commedia Dell’Arte is an ancient form of comic theatre that uses Half Mask and Clowning. Today’s best comic films, sitcoms and theatre shows are created with the same principles of comedy that were at the heart of this theatre style. Commedia Dell’Arte or ‘Comedie Humain’, as Jacques Lecoq called it, is steeped in human nature, in the foibles of man and the ridiculous lengths he will go to in order to avoid pain and suffering and to ultimately survive. The comic territory revealed when playing in a half mask requires the performer to play in a heightened register that goes well beyond naturalism. A theatre of action and passion…

During the ‘Art of Comedy’ participants take a journey into the ridiculous, where they first encounter their own ‘clown’ and then progress into the depths of the world of the half mask. Both comic styles leave an impression on the body of the performer and liberate the actor to create the comic work of today.

A clown can play anywhere there is an audience. Modern technology has opened up a whole new context. Our work is now able to be seen potentially by millions of people around the world. As Chaplin and Keaton were pioneers a hundred years ago with the new technology of film, today the internet gives us an unprecedented opportunity to reach out and touch people with our art. During this workshop participants devise a number of pieces for performance on camera. 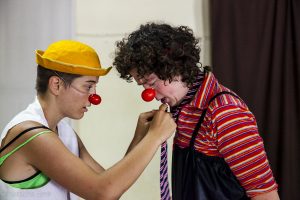 Book your place on this course

It's quick and easy. Fill in the details below and click "BOOK". You'll be able to pay your deposit on the next screen.

‘Last summer was my first time at the Actors Space doing ‘The Art of Comedy’ and it was for many reasons the most magical and constructive experience. In this generous, safe place that Marian & Simon have made, I learned to strip away my judgment and quieten my overthinking in order to really listen and react in the moment. To trust my instinct and to make brilliant ‘mistakes’. Anna Brooks-Beckam, Uk
‘I have experienced workshops were I have found it tricky to see how they could really transfer into performance work. This workshop is not like that at all and after working in isolation for a while it has been so exciting and refreshing and new ideas have been brought into life!’. Kathryn Bond, Ireland
‘I have studied The Art of Comedy at The Actors Space over the past two years and the workshops are not only run to the highest of excellence but also offers a totally unique and special experience, certainly unparalleled to any course I had ever studied  before.’ Martin Condon, Ireland

Breakfast
First sessions: 10am to 1pm (with a break)
Lunch is at 1.30pm (time to rest or swim)
Afternoon session: 3.30pm to 6.30pm
Dinner, 7.30pm (relax, socialise and enjoy the beautiful Catalan surroundings)

This Workshop has a day break.

Find out more about the wonderful place where you’ll be staying and working.
(You won’t want to leave!)

Questions? Try our helpful FAQ or email us.

“You get these nuggets of wisdom that you can never forget”. Francisco Gomes, Portugal
‘Thank you for creating such a heaven for artists to meet, absorb and grow – you are very special people’. Sheila Kay Sly, Uk
‘Thank you for the inspiring tuition, insightful discussion, beautiful food, stunning surroundings, welcoming atmosphere and encouraging feedback. Will definitely return to learn more from you in the future. Here is to Clowns that change the world, one laugh at a time!’. Vachel, Australia
‘I think I have actually never laughed so much in my life. Thanks for a magical experience’. Adrian Scanlan, Ireland
‘Another magical group and a wonderful life changing experience. Thank you for setting us free!’ Joe Bentley, Barcelona
‘…you know what? I am coming back!’. Anne, UK
“The clown has great importance as part of the search for what is laughable and ridiculous in man. We should put the emphasis on the rediscovery of our own individual clown, the one that has grown-up within us and which society does not allow us to express”.
Jacques Lecoq